A computer hard disk drive (HDD) is the mechanism that controls the positioning, reading and writing of the hard disk, which furnishes data storage. A hard disk drive — often shortened to hard drive — and hard disk are not the same thing, but they are packaged as a unit and either term can refer to the whole unit. Hard disk drives can be found in desktop computers, mobile devices, consumer electronics and enterprise storage arrays in data centers.

Sequential is the speed at reading/writing big files. So if you were copying a bunch of 1 GB movie files (which weren’t fragmented), the sequential speed is what you’d expect. For a modern 7200 RPM drive it ranges from about 80-160 MB/s today.

A hard disk drive (HDD), hard disk, hard drive or fixed disk is an electromechanical data storage device that uses magnetic storage to store and retrieve digital information using one or more rigid rapidly rotating disks (platters) coated with magnetic material. The platters are paired with magnetic heads, usually arranged on a moving actuator arm, which read and write data to the platter surfaces. Data is accessed in a random-access manner, meaning that individual blocks of data can be stored or retrieved in any order and not only sequentially. HDDs are a type of non-volatile storage, retaining stored data even when powered off. The first production IBM hard disk drive, the 350 disk storage shipped in 1957 as a component of the IBM 305 RAMAC system. It was approximately the size of two medium-sized refrigerators and stored five million six-bit characters (3.75 megabytes) on a stack of 50 disks.

In 1962 the IBM 350 was superseded by the IBM 1301 disk storage unit, which consisted of 50 platters, each about 1/8-inch thick and 24 inches in diameter. While the IBM 350 used only two read/write heads , the 1301 used an array of heads, one per platter, moving as a single unit. Cylinder-mode read/write operations were supported, and the heads flew about 250 micro-inches (about 6 µm) above the platter surface. Motion of the head array depended upon a binary adder system of hydraulic actuators which assured repeatable positioning. The 1301 cabinet was about the size of three home refrigerators placed side by side, storing the equivalent of about 21 million eight-bit bytes. Access time was about a quarter of a second. A modern HDD records data by magnetizing a thin film of ferromagnetic material on a disk. Sequential changes in the direction of magnetization represent binary data bits. The data is read from the disk by detecting the transitions in magnetization. User data is encoded using an encoding scheme, such as run-length limited encoding, which determines how the data is represented by the magnetic transitions.

A typical HDD has two electric motors; a spindle motor that spins the disks and an actuator (motor) that positions the read/write head assembly across the spinning disks. The disk motor has an external rotor attached to the disks; the stator windings are fixed in place. Opposite the actuator at the end of the head support arm is the read-write head; thin printed-circuit cables connect the read-write heads to amplifier electronics mounted at the pivot of the actuator. The head support arm is very light, but also stiff; in modern drives, acceleration at the head reaches 550 g.

Modern drives make extensive use of error correction codes (ECCs), particularly Reed–Solomon error correction. These techniques store extra bits, determined by mathematical formulas, for each block of data; the extra bits allow many errors to be corrected invisibly. The extra bits themselves take up space on the HDD, but allow higher recording densities to be employed without causing uncorrectable errors, resulting in much larger storage capacity. For example, a typical 1 TB hard disk with 512-byte sectors provides additional capacity of about 93 GB for the ECC data.

In the newest drives, as of 2009, low-density parity-check codes (LDPC) were supplanting Reed–Solomon; LDPC codes enable performance close to the Shannon Limit and thus provide the highest storage density available. Two enterprise-grade SATA 2.5-inch 10,000 rpm HDDs, factory-mounted in 3.5-inch adapter frames
Smaller than their desktop and enterprise counterparts, they tend to be slower and have lower capacity. Mobile HDDs spin at 4,200 rpm, 5,200 rpm, 5,400 rpm, or 7,200 rpm, with 5,400 rpm being typical. 7,200 rpm drives tend to be more expensive and have smaller capacities, while 4,200 rpm models usually have very high storage capacities. Because of smaller platter(s), mobile HDDs generally have lower capacity than their desktop counterparts.
There are also 2.5-inch drives spinning at 10,000 rpm, which belong to the enterprise segment with no intention to be used in laptops. 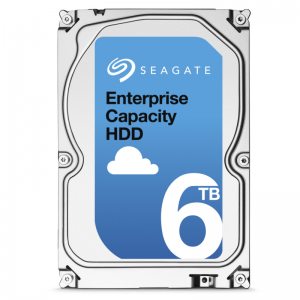 Typically used with multiple-user computers running enterprise software. Examples are: transaction processing databases, internet infrastructure (email, webserver, e-commerce), scientific computing software, and nearline storage management software. Enterprise drives commonly operate continuously (“24/7”) in demanding environments while delivering the highest possible performance without sacrificing reliability. Maximum capacity is not the primary goal, and as a result the drives are often offered in capacities that are relatively low in relation to their cost.
The fastest enterprise HDDs spin at 10,000 or 15,000 rpm, and can achieve sequential media transfer speeds above 1.6 Gbit/s and a sustained transfer rate up to 1 Gbit/s. Drives running at 10,000 or 15,000 rpm use smaller platters to mitigate increased power requirements (as they have less air drag) and therefore generally have lower capacity than the highest capacity desktop drives. Enterprise HDDs are commonly connected through Serial Attached SCSI (SAS) or Fibre Channel (FC). Some support multiple ports, so they can be connected to a redundant host bus adapter.
Enterprise HDDs can have sector sizes larger than 512 bytes (often 520, 524, 528 or 536 bytes). The additional per-sector space can be used by hardware RAID controllers or applications for storing Data Integrity Field (DIF) or Data Integrity Extensions (DIX) data, resulting in higher reliability and prevention of silent data corruption.

Consumer electronics HDDs
They include drives embedded into digital video recorders and automotive vehicles. The former are configured to provide a guaranteed streaming capacity, even in the face of read and write errors, while the latter are built to resist larger amounts of shock. They usually spin at a speed of 5400 RPM.